As you may know from reading this blog, my fiancé Steve and I have many adventures. But none has been as exciting as the one we’ve undertaken since deciding to participate in National Novel Writing Month (or NANOWRIMO) in November of 2012.

Since Steve and I met in South Korea on St. Patrick’s Day in 2011, writing has been among our favorite topics of conversation. We talked incessantly about Steve’s memoir-in-progress and his desire to write about his travels, about my journalism and two historical fiction manuscripts sitting disconsolately in forgotten files on my hard drive. When I explained to him that I had written those novels in one month during NANOWRIMO, he became instantly intrigued. And thus his excitement for NANOWRIMO began.

We talked plot points and story arcs all through October as we hiked Korea’s wooded hills, we googled character names and locations that would make good scenes. When November rolled around, we lived and breathed fiction for one month as we both steadily plodded towards 50,000 words.

During that time, though our relationship was as strong as ever, I felt the need to leave the nomadic lifestyle and spend time with my family in California. Steve had no intention of living in the U.S., and we didn’t know how we would keep a long term relationship alive. I left for three months, and of course, we missed each other terribly. It was a sad time, but even so, the novels progressed. Particularly Steve’s. He surpassed his goal of 50,000 and while I was gone racked up 60, 70 then 80,000 words, eventually topping out around 100,000.

After many conversations, we made compromises, and we decided we couldn’t live apart. I moved back to Korea, and we began talking about writing again. This time, all Steve could discuss was his novel. I read it. It was good…really good. He was so excited to edit it and try to make the first draft into something incredibly special. Meanwhile, he lost his job after the school he was teaching at in Korea closed its doors. 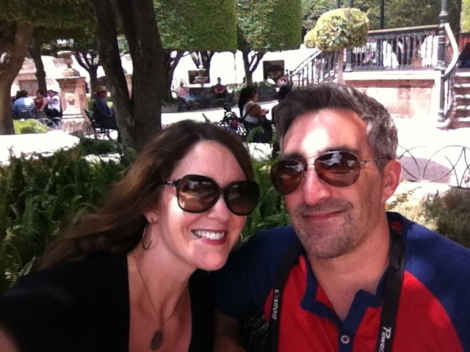 This is where the real adventure begins. In May 2013, we decided that I would put my novel on hold for the time being and continue to work while Steve pursued his dream of finishing his novel. And so as we gallivanted through Thailand, Cambodia, India, Australia, Indonesia (where we became engaged!), France (where we bought the ring!), England, the U.S. and finally landed here in Mexico with some semblance of permanence, Steve persevered in his pursuit of the great American…er…English novel.

And now, said novel is approximately seven weeks away from publication!

His story is a coming of age tale set in 1960s England. It is about a boy, fearful of the world and his place in it, and afraid to stand up for himself. His journey is one of self discovery, and of finding out that the world, although beautiful, can be a hard place. But one that is well worth the effort. Parts of it remind me of Steve, other parts don’t.

But the bracing title, “I Have Lived Today” is a mantra that Steve shares with his protagonist. This phrase is from a poem by the ancient Roman poet Horace, and it’s also the way that Steve chooses to live his life.

Steve embraces every moment. His enchantment with life and live-in-the-moment attitude are what captured my heart, and are some of the reasons I believe that he has wholeheartedly embraced this novel writing process from start to finish.

He and I have been on many adventures together, and with this, his first novel only seven weeks away from publication, I believe that a whole new chapter of adventures is about to begin. Congratulations, babe! I’m so proud of you!

Steve blogs as The Twenty First Century Nomad, where you can sign up for weekly updates about his book release.

6 responses to “I Have Lived Today: A Poem, a Mantra and now, a Novel”

New Books by The Chic Adventurer