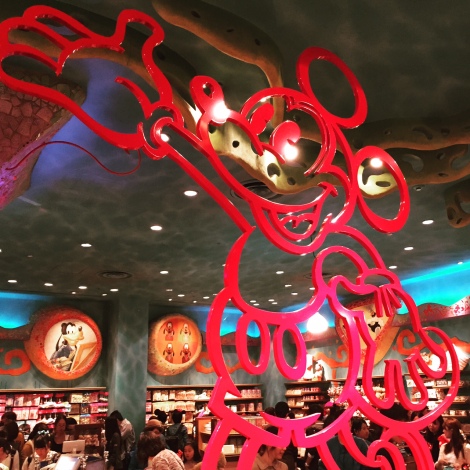 Having visited Disneyland in California, Florida and Hong Kong, a visit to Japan would not be complete for a Disney-obsessive like me without a trip to Tokyo Disneyland. However, after extensive research, I gleaned that Tokyo Disneyland is similar to that of the California and Florida parks, and that it was Tokyo Disney Sea that I should really be visiting if I only had one day.

Turns out, I only had about six hours. Due to unforeseeable circumstances of the fiancé’s stomach, our foray to Tokyo Disneyland didn’t begin until after 1:00 p.m. And since we rode Tokyo’s massive subway system to get to the park (which requires multiple transfers), we didn’t arrive until 3:00 in the afternoon. “No matter,” I said, making the best of my visit. “We still have seven hours.” Or so I thought.

At the ticket gate, I whipped out my MasterCard debit card linked to my American bank account. This is my primary card as it has no international fees, and I’ve used it in every country I’ve traveled to, including remote places off the tourist trail in India, Guatemala and Cambodia.

Upon seeing it, the once friendly man at the ticket counter turned awkward.

I whipped out my secondary card.

Having only enough Yen for half of one ticket and having mistakenly forgotten Steve’s credit card in the apartment, I inquired where the ATM was, and I learned that there was NOT one outside the gates. He further explained that there was only an ATM inside the gates and that NO, I could not use it because I didn’t have a ticket to go in. At this point, Steve noticed my crestfallen face and stepped in to manhandle the situation.

They sent someone to escort me to an ATM inside the gates.

Literally directly inside the turnstiles, I made a beeline for the ATM with my overly smiley minder close on my heels. She respectfully turned away as I slid my card in.

I chose my language.

“Japanese or international card?” it asked me.

I pressed international, and it asked me to choose between two banks in China.

I tried again, there must be some mistake.

I called my minder over. She smiled again and said, “this ATM only accepts Japanese and Chinese cards.”

As it turned out, the closest ATM that accepted a variety of international cards was a monorail ride away. To get to the main ticket gates, you have to spend about $2.50 per person to ride a special Disney monorail. So, I had to spend another $2.50 to go back to the main station where I had just come from and search the mall there for an ATM. Then I had to spend another $2.50 to take the monorail back to the ticket gate with my cash. Steve waited behind to avoid the extra monorail fares, and all told we wasted over an hour trying to locate an ATM meaning we didn’t enter the park until after 4:00 p.m.

Disney, I’m one of your biggest fans, but I’ve never been more disappointed with you in my life. Not having an ATM outside the gates when you don’t accept debit cards is a HUGE mistake. On top of that, it’s seems awfully discriminatory to have ATMs inside your park that only accept Chinese and Japanese cards.

Despite the ATM debacle, Steve and I had an excellent time at Tokyo Disney Sea, and I’d happily advise anyone to go: But word to the wise, bring cash.

8 responses to “Debacle at Disney: How an ATM Disaster Almost Ruined my Visit”

New Books by The Chic Adventurer